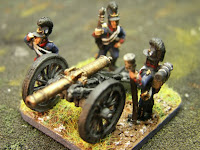 The Kingdom of Bavaria was a major ally to Napoleon's Campaigns, and a significant contributor to the Emperor's war effort. Posted today is the beginning of Napoleon's VII Corps of the 1812 Campaign into Russia.
For your approval... what we have here are Old Glory 15mm Bavarian gunners and cannon (12 lb and 6-8 lb). Soon after the two allies cemented their relationship off the field, the Bavarians made strides to become more uniform with their new friends, taking on new organizations, tactics, and even uniforms more akin to the French.

The Bavarian artillery received a complete overhaul in ordnance and organization to include, yes, French gunner's uniforms. What remained was the "Raupenhelm", sometimes called the weiner helmet, that was worn by virtually every other branch of Bavarian service.

The guns were mainly 6-8 lb field peices with some occasional 12 lb guns included in various units. The guns were bronze smoothbores, and carriages of the common touble-trail design painted light gray.

The figures and guns were primed in dark-gray primer and them blackwashed for extra depth in the recesses but not necessarily darkening the highlight areas. The faces took to the brown wash very well and I was happy with most of the results. All colors were either GDW, Polly Scale, or bulk acrylics.

The belting and painting all the little "do-hickies" common to 19th century uniforms was tricky, but not overwhelming. All 15mm infantry have their uniform quirks. The tricky part was obtaining good, practical information concerning details and all the various colors. Painting Napoleonics is a bad time to go "FARB". 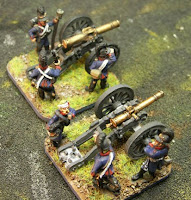 The guns were a bit of an experiment... you will need to tell me what you think. My bronze paint seems to come off a little light IMHO, so I applied brown-wash to the entire barrel before adding black-wash to the barrel bands, muzzle, and lifting hooks. This method refers to the 12lber only, I skipped the brown-wash for the 6lber.

Looking at the photos I see a good amount of detail to finish and goofs to fix. This is my first foray into Napoleonic minis (at the long behest of Scott MacPhee), and I think I've a good deal more to learn. I don't feel these are up to my standards yet, I'm sure I can do better, so consider this a work in progress. That's all for now.

Whew!!
I do apologize for the LOOOOOOOOONG delay between posts, but when one goes to parcel-out their day, sometimes the miniatures blog needs to take a backseat. It is NEVER a permanent backseat however, and I'm back and painting strong.
This is the first installment of my 12th SS "HitlerJugend" army for Flames of War and other 15mm games that may come my way... the all important Pak Platoon!!

This was a 7.5 cm high-velocity gun, very lightweight for its size yet quite robust in the field. This weapon was comperable in performance to what the Pz Mk IV and Stg III/IV were carrying for armament, and was quite capable of knocking-out anything the Allies had in inventory at reasonable combat ranges.

...were modeled well, but the castings had much to be desired. One gun tube was mis-cast and didn't have a muzzle brake on the end. I could chance my luck and send for a replacement part, or just model the gun as being w/o said brake. This is completely plausible as they were an assembly that screwed into the muzzle of the gun. Aside from losing a bit of projectile velocity, the gun would still be servicable. In addition to the mis-cast barrel, the lower half of the gun shield on all three models had a considerable amount of flash and 'crap' that had to be cut and filed down. This proved to be very difficult.

THE CREWS...
... were by the new sculpter at BattleFront and for the most part were ok. The prone ammo handler was a disappointment as there was little face detail. Only after a wash did any appreciable detail materialize. 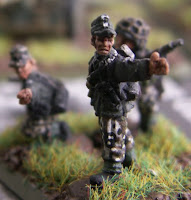 THE STANDS...
... were the plastic stands that come with the pack though I HIGHLY suggest that you wash them. They are just sick with release agent and paint, glue, etc has a very rough time sticking to them. Healthy doses of railroad ballast (no kitty litter) and static grass complete the package.
I still have a bit more to do to be "completely" finished, adding silfor grass, some minor details, but in all a decent package of minis.
Posted by TIGERtanker at 12:51 AM 1 comment: