I picked up these little beauties from Merlyn's in Spokane last weekend, the IS3 heavy tank platoon by BattleFront. Very good sculpts, and the resin suspensions were a new twist.  Very clean and crisp casting, loads better than the standard metal ones. I daresay even better than the new line of plastic parts BattleFront has been producing lately.


As pleased as I am with the suspension sculpts, I am a little worried about wear and tear. One good drop and they will surely shatter.

One concern was the fit of the suspensions to the hull. The castings didn't seem to really fit well, and a few seemed slightly warped. Now, if you are a long time BF collector, this isn't rare, or a big deal. Yo simply bend and twist the metal parts back into shape. Sadly you can't do that with resin and one has to make things work as best they can.  With some filing and trimming I got the tracks to fit, and they look fine from "a players view", but if you turn them over there are massive gaps between the hull and tracks, making any glue bond kinda suspect.  I poured as much superglue as a I dared into the gaps and honestly I don't really anticipate a problem.

The painting was fairly straightforward. I prime/based with the Krylon "camo green" spray paint.  Its an outstanding primer in an of itself, and I think a pretty good match for US brown-violet. For Allied vehicles the Krylon save several steps. Over that I did a heavy dry-brush with a lightened Tamiya olive-green, blackwash with oils (very heavy on the back-deck grates), a little rust effects on the spare track and exhaust, and a VEEEEEEEERY light dusting of stone tan. I used the decals from the PAVN T-34M box set, "distressing" them with a sponge daubing of Tamiya olive-green, and a little rust.  The Soviet red star is hand painted.

My intent is to be ready for any sort of "what-if in 1946" sort of game opportunities. If not, my local group is reasonable about proxies and will make an awesome IS2 platoon.

Not that it took me three attempts or anything...

Here I present for your scrutiny and entertainment, my IL2 Shurmovik.  All resin, 1:144 scale made by Battlefront mainly for use in their Flames of War system.

This camo pattern is pretty much stock, as presented by "those who know", the standard brown-green tigerstripe pattern.  It's all I've ever seen, and it is very easy to just rely on this standard scheme.  I've tried, my first few attempts at painting this aircraft were really dismal, unimaginative attempts at mimicking this stock scheme.  However, as we all should know, if one takes the time to do some basic research some really neat things happen.

Google led me to a subsection of "Soviet Warplanes.com"

where I found a completely gnarly webpage on not only the sturmovik in all its evolutions, but also the regulation camo schemes, color, and patterns as the war progressed.  The schemes are even broke down by factory and unit in some instances.  If you have ay shine at all about the IL2, you REEEEEAAAALLY need to visit this site. You won't be disappointed.

At any rate, I tried to match the make of Sturmovik modeled by Battlefront to the earliest example, and I matched the model as the IL2M. 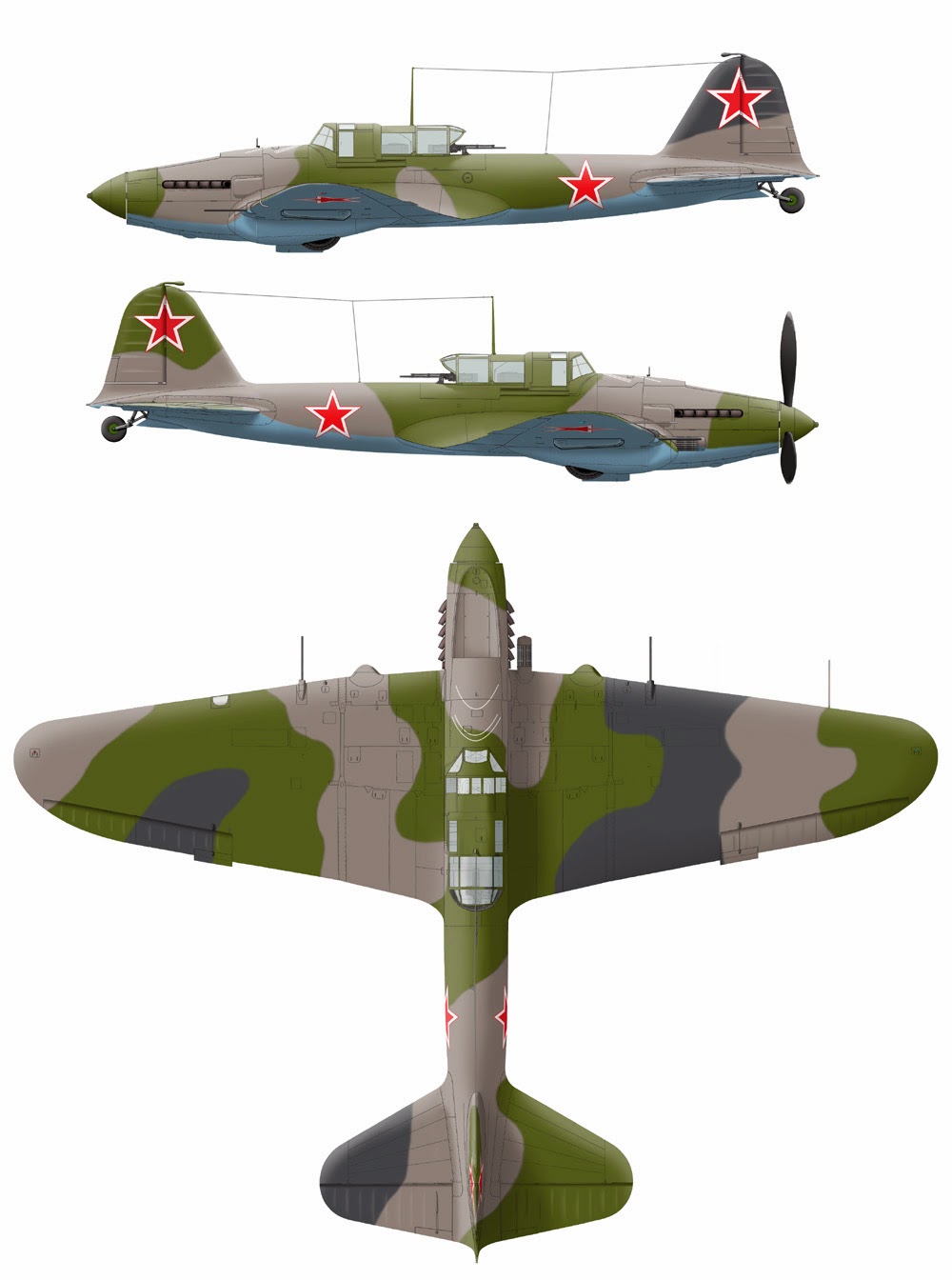 ﻿
Now this looks nothing like that old, boring, plaid-out model-box camo scheme... so I went to work. 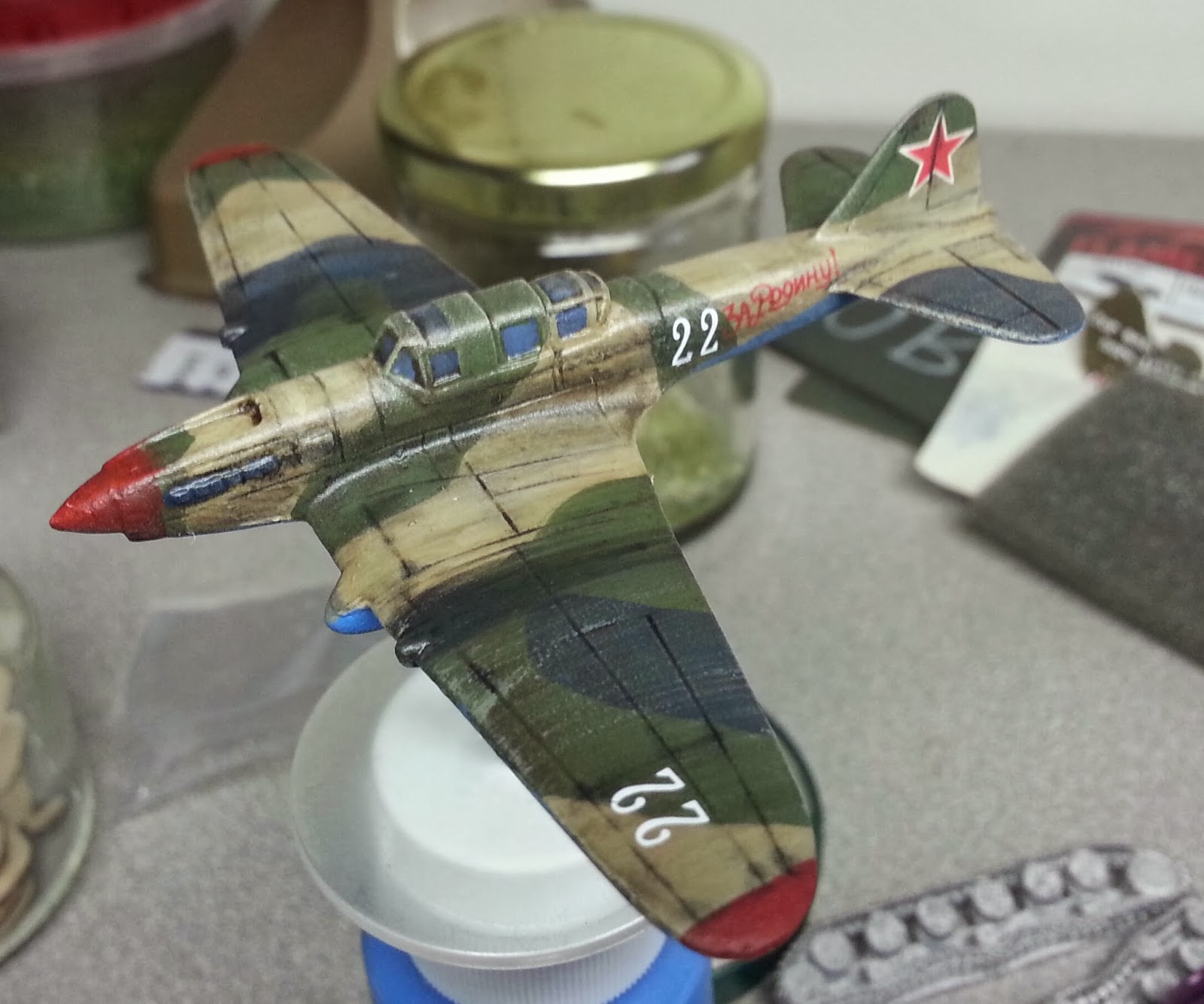 So here we are, "white 22". I based the paint scheme on the the Kuybyshev factory camo standard, after August 1943.  I added the red nose and wingtips.  Call it a weakness. I also wanted the opportunity to experiment with oil weathering, and practice my panel line inking.