Flames of War "Basecoat in a Can" review...

As I'm slowly plugging along with my 12thSS Panzer Division FoW army, the time has come to add tank support.  What better support can an "HJ" grenadier ask for than from his brothers in 12th SS Panzer Regiment?  The best of these are Panthers...   so I gotta get busy!

I saw that BattleFront has released spraypaint specifically formulated for WW2 tank color schemes based on nationality.  The Germans, for most of the war (or the latter half at least), base-painted their armor using variations of a yellow-ochre, commonly referred to as "Panzer Yellow".  Now, unless you were lucky enough to own an airbrush, along with its accrutrements, along with the space, & skill to use it... you were left, in essence, "slathering" panzer yellow all over your miniature... with various results.

For all those who have done it, brush-basing your armor minis is a time consuming, torturous process.  One must somehow reconcile painting speed and coverage, all the while taking pains not to obliterate the fine detail of your mini.  BattleFront's spray makes the promise to not only improve paint speed and coverage, but also do this in an (argueably) historically accurate color.  This, for me anyway, has been a challenge... so when I became aware of this product, I was very interested in giving it a go. 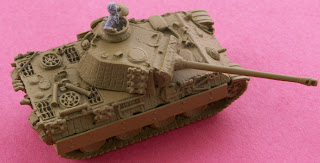 Here we have what will become Max Wunsche's regimental befehlspanther, based upon the Ernst Barkmann boxed set by BattleFront.  I used a light-gray spray primer (as opposed to dark gray or black) with the idea to get as much "pop" in the yellow basecoat.  It was suggested that I mask the vehicle commander as the basecoat can get a little thick.  It does come out a bit thicker than a primer, and one must understand that these paints are not primers in themselves.  It is very recommended that you do prime your mini before applying the basecoat.

Immediately you see that its best to use many light, "gentle" passes with the paint to get best coverage, and to not ruin fine details like the zimmerit paste, nuts & bolts, handles, etc.  Overall I feel it did a fine job with the primed mini, the color looks good, and little to no detail has been lost.  Grade A.

Here we have what will be Panther "136" commanded by Scharfuhrer Hohnecker (kia).  This is a different story, as this mini was already primed and basecoated, and had camoflage (red brown and olive green) applied... but it didn't really "pop", so the plan was to strip the mini in PineSol and try again.  However, as we all know, the superglue that tends to hold these minis together also dissolved and one needs to re-apply all the bits and pieces.  Again, time consuming and irritating.  I'm a sucker for stowage, being a former tanker myself, and enjoy seeing the motley character of each vehicle.  Simply, I didn't want to do it again becuase I like how it is now.  I decided to experiment and see if the BattleFront basecoat can re-habilitate this mini.  As we can see, it does a fair job, some detail is lost but then again it is its third coat of paint, but quite acceptable.  The older paint is well covered, and I'm ready to bring this mini back to life.  Grade: B+ 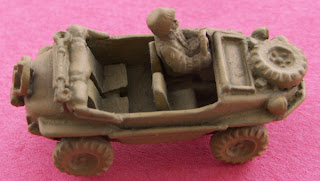 Lastly, I was curious as to how this basecoating would look on minis primed in black.  This schwimmwagen was primed and ready to go.  The coverage is decent, and although it wasn't deliberate, there seems to be a consistent "shadowing" in the recessed areas.  I may have been a little more conservative in the application of basecoat, but I do think I can do good work with this mini as it stands.  Grade: A

There you have it, a positive review of BattleFront's "basecoat in a can"... for 'Panzer Yellow' at least.  This is probably the most difficult base-color to work with (as opposed to various greens eh?), but I seem to have gotten good results.  Be gentle and patient, it doesn't work miracles after a heavy hand, but it should do the trick for you.  It had better, the stuff retails for about $12 a can!  So far I can say its worth it, I primed and based a platoon of 5 panthers (these and three others) in less that 20 minutes.

Stay tuned for the finished products!!

-aus
Posted by TIGERtanker at 2:08 PM No comments: