I wanted to take up the challenge of doing modern US Army troops, in what was at the time the field uniform, in UCP camoflague.  Between the color scheme at scale, and the dot patterns, it was a GREAT challenge, having to paint and strip several times before I arrived with a technique that yielded the results I wanted.  For your amusement... 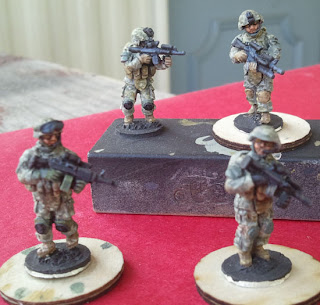 The scheme is a basic light gray, with light green/gray and "Feldgrau" blotches mostly oriented in a horizontal plane.  I washed the helmets, crotch plates, body armor, elbows and knees in brown to mimic the dirt and grime, and how some uniform bits may be washed more often than others. 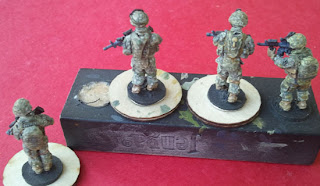 Now, just when I thought I had accomplished something, now the Army comes up with "unicam"... and I gotta start all over again.

I intend to use these for the new Force on Force modern skirmish rules.  I'm going 20mm, and it should be awesome!!
Posted by TIGERtanker at 9:01 PM 1 comment:

A little help for my... comerades! 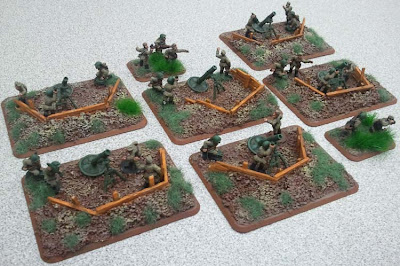 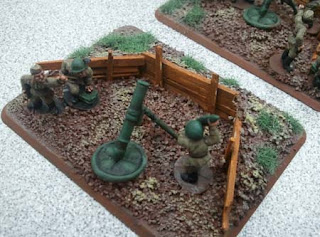 I've decided to dig the battery in, making for a more interesting visual. The process wasn't hard, build the timber frame and pile up the gravel in front of it layer by layer. 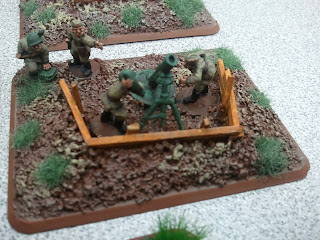 The gun crews I patterned on the early-mid war
uniforms, using Polly S dust as a base, highlighted with Polly-S mud.  Fielding a Soviet army on a budget, these will work for early and mid-war armies, and will pass for later-war as well.  The mortar tubes were primed in Krylon camo-green, black-washed with painters oils, then highlighted with German panzer olive. 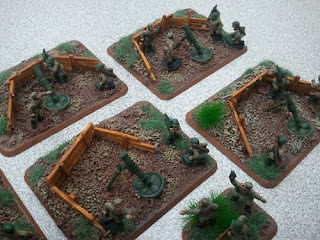 For the timber-cribbing I used stir-sticks from a local coffee shop.  I split them width-wise into three, and tore them into the lengths I needed.  After super-gluing them into place, I coated them with a GW wood brown, then black-washed them in the joints, recesses, and seams to give it a more aged look. 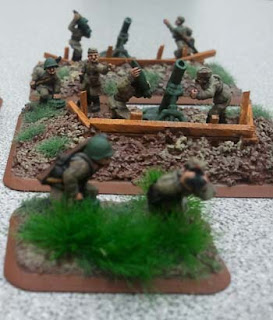 I'm still not quite satisfied with the soil effects, and will be experimenting with finer grain materials, colors, etc.  Still, they should catch a few eyes on the table.

I look forward to ranging in with them, and putting some poor infantry platoon out of my misery!
Posted by TIGERtanker at 3:17 AM 2 comments:

Finally!! I got there little monsters to where I want them, and am comfortable putting them on a gaming table.  I'm kind of a nerd about that, and get really self conscious about putting sub-standard lead, or plastic as the case may be, on the table.  This last tournament I entered was a real nightmare for me, as much of the force I fielded was little more than base-coated.  There was little I could do, if I wanted to play at all, and had to swallow my pride.  When my friend Scott MacPhee wasn't able to show, I really wasn't that put-out.  I would have been embarrassed and spent too much time making excuses, etc. 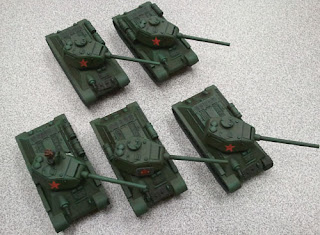 What I have for you today is a unit of Soviet T-34/85's, made by Plastic Soldier Company, painted in generic, oversized markings.  I base-coated the plastic in Krylon "ultra-flat camoflague green" spray primer.  The looked good but came off a bit too "olive" for Soviet equipment, so I applied a tint of Tamiya olive green to bring the base more in the direction of what Soviet armor generally looked like.  Next I applied numerous oil washes with red-brown and black, in separate coats and in combination, to provide shading and weathering effects.  The rear deck, and the vents received the lion's share of this treatment. Next came highlighting using Polly-S Panzer Olive green.  I just didn't feel comfortable going any lighter. 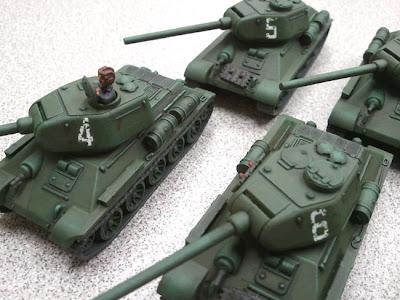 No historical marking schemes seemed to attract my attention, so I decided to do oversize markings and use what I had left over from my IL-2 box set.  I used the wing stars and fuselage numbers, in a single digit scheme, creating a generic Soviet unit, but giving the appearance of some sort of regulation or order. I had to "wing it" a little, as the decal sheet didn't have the "1" or "6" numberals, so a chopped "4" and a frankenstein combination of a "2" and an upside-down "5" did just nicely.  I shied away from the various coats of glosscoat, dullcoat, et al and just stuck with decal set.  What silvering did crop up I painted over with Tamiya Olive Green. Not perfect, but I think I can get some sweet results with more practice. All in all this decal experience was far better that past bunglings. 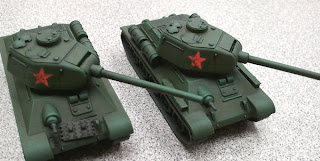 My overall painting style is what I call "Rabid Monkey" style, where models are liberally highlighted, but not also severely contrasted, and with some modest weathering thrown in.  The rear deck of tanks are a dirty, "diesely", oily area, and I wanted to reflect that.  I also wanted to distress the turret markings somewhat, so they aren't pristine and visually distracting.  I used the sponging technique, and I think I got really lucky!  The numbers, I think, have a great effect, and am happy with the results.

All I need to do now is repeat my luck with the 5 (6 including the Dedov model)  /42 turrets for mid-war units.  I've got 1/72 dry transfers coming soon so I'll keep y'all posted on that progress.
Posted by TIGERtanker at 3:45 AM 1 comment:

Assembly wasn't bad, but the track can be a bit fiddly, and I tried many different methods of getting that track on without too much trouble or the gaps that everyone seems to be getting.  I think I solved the problem to about 80%, by gluing the tracks on prior to installing them on the running gear.  It takes the patience to allow the glue to fully dry and cure, with a combination of "super" glue, and proper plastic cement. 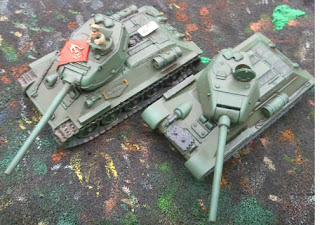 Painting was easy, the PSC had good clean lines, but had little detail.  BF had less rear-deck detail, but more storage and clutter to catch highlight colors.  Still, I think they both turned out fine.  I used Krylon "Camoflague" green spray paint.  It's a primer, geared for plastics, and is WELL worth the expense.  It sprays very smooth, covers fantastically, and in this case comes out looking most like the US Olive Drab spray paint put out by BF.  I used that as my darker base, and higlighted liberally with Polly-S "Panzer Olive Green".  Two black oil washes for depth, and a brown wash for weathering, and here we are.

I still have some work to do, with one track still needing to finish assembly and basecoat/priming, the rest need attention to the track and tow cables.  I'm debating whether or not to add dust effects, or just keep them clean.

The Dedov model I'm using for my battalion command track, the rest I'm using for the line companies.  Right now, for the tourney I'll have to sub some Shermans, but another box or two of PSC tanks and that problem will be solved.  Wish me luck!
Posted by TIGERtanker at 1:04 PM No comments:

I had a wild idea a some time ago about taking Advanced Squad Leader scenarios and converting them to Flames of War.  Historical scenarios with FoW are something, I feel, that can be greatly expanded upon, as a taste of "something different", and a way to better embrace the historical nature of a table-top miniatures wargame.

For starters, I found a campaign of historical scenarios authored by Pete Pollard.  The campaign tackles the foiled German counter-offensive at Mortain.  Several panzer divisions, including SS units, faced off against (primarily) the US 30th Infantry division.

Here is the first installment, "Prelude to Luttich"...

"Near LaFantay, France, 6 August, 1944:  In the waning light of an early August day, lead elements of the 2nd Panzer division made contact with the US 30th Infantry division in positions located north of Mortain.  A handful of Panthers, supported by infantry, advanced on the northern units of the 117th Infantry regiment.  The Americans had set up a roadblock north of St. Barthelmy with a few squads and two 57mm AT guns."

German player hold units OFF BOARD and enters from east board edge on turn one.

Victory Conditions:  To win, the German player must destroy both AT guns AND exit 9 infantry teams off the west board edge.  The US player wins by avoiding the German VC.

US-  Elements of the 117th Infantry rgt, B company set up anywhere within 30inches of western board edge. All infantry and man-packed gun teams begin dug-in and gone to ground.


German- Elements of German 2nd Panzer division & 3rd Recon Bn enter board anywhere along eastern edge.  All vehicles are limited to 1/2 movement for turn one.

US AT gun platoon enters the game together as 2 seperate "platoons", the original with platoon cmd team and 1 gun, the second "kampfgrupped" with the company 21C and 1 gun. US gun teams begin dug in.

Fairly simple, dirt roads, wheat fields, trees and bocage.  It is August and nearing the harvest so the wheat fields should be rather tall.  The large brown mass in the NE corner is a hill.

Aftermath:  "The 57mm guns fired 15 rounds at the lead advancing tanks.  Not surprisingly, none of the shells penetrated the Panther's frontal armor.  The lead tank's shot on the roadblock killed two men and destroyed one of the AT guns.  The remaining Americans withdrew, but were quickly re-enforced with more squads and artillery support.  The Germans faded into the woods as darkness enveloped the field of battle."


This one is going to be tough, the Germans outweigh the Americans in points by about 2 to 1 (using FE).  Good luck and enjoy!!
Posted by TIGERtanker at 3:40 PM No comments: