I was planning to present my first completed Confederate regiment based for the Regimental Fire and Fury system.  I was planning it anyway, until my 4 year old son (yes, he who is pictured a few posts back) decided to "help" me by improving the flesh highlight, by painting ALL THIRTY+ FIGURES IN MASS GLOPPY GOBS OF GDW "ELVEN FLESH"!!!  I was devastated, but did recognize the opportunity.  It had been years since I had painted ACW figures, and it took a few tries to bring them "to speed", but now I consider myself "warmed up".

Needless to say the stands were ruined... but not destroyed, and they now sit in a small vat of Pine Sol, awaiting rehabilitation.  What is a painter to do but start over?  So, here now is my first offering, a "brave Colonel" marker from the Confederate ranks. 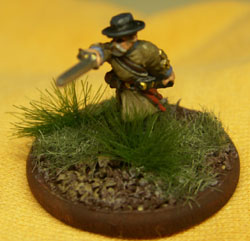 The figure is a 15mm Peter Pig, and though some of their WW2 line scares me, I have been most impressed with their ACW offerings.  Being an Old Glory convert, I do wish the poses were more diverse, but the robustness of the castings and the overall quality can not be over stated.  Simply put, there is no "unusable figures, and the flash is at a minimum. 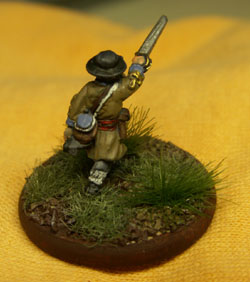 Personally, I enjoy the pose, reflecting the natural aggressivness of the Confederate officer... or at least that as passed forth by myth. 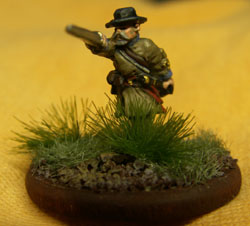 I look forward to placing this marker on the field against MacPhee's "damned yankees"... and sweeping them from the field.
Posted by TIGERtanker at 2:11 AM 2 comments:

Well, the boys at Flashpoint seem to be on vacation, hiatus, or whatever, and the activity there has been minmal.  Rumor has it there has been a major injury to one of the staff, and production problems in some lines they are about to release.  I understand priorities, but you can't make a gamer wait indefinately... which is about what things have devolved to there at FP.

Soooo, I've gone back to the beginning, a noteworthy phrase if you are a fan of "The Princess Bride", back to the American Civil War.  This is the era I began with, and painted my first 15mm miniatures for tabletop wargaming.  I look back I can remember just how bad I sucked back then... real gawd-awful stuff initially.  Yet, as I look back I can remember soaking up everything I learned, everything I saw, everything I heard from those who were established painters and helped me.  I learned and got ideas from those who also were exploring the hobby alongside me.  I remember how each session seemed a little better than the last.  Each stand of figures were just a little bit better than the last... until I finally could field an army I was proud of and perhaps was a little better than those of my peers.

That was 15 years ago.  I've long sold my 15mm ACW army (2 divisions of Rebels, 1 of Federals, based for Fire and Fury Brigade Series), and I'm finding myself rebuilding my Confederate forces from scratch, one lonely infantryman at a time.  I'm lucky in that I do have some Old Glory 15mm to get things 'moving' again, but I'm finding that the quality of figures just isn't as I remember them.  This could be because I have only the pack-dregs and used all the good castings years ago... or maybe they weren't that good to begin with.

I've always like Old Glory ACW figs, mainly for their diversity, and the dynamicism of their castings.  Units of Old Glory were ALIVE!!, and not all necessarily at 'right-shoulder-shift'.  There was that "curse" though, that 10-15% of figures that were mostly unusable due to casting errors.  Sometimes one could take the figure with the "blobbed" head and making him a walking wounded inf'yman... sometimes the miscasting was just too much to repair.  There ALWAYS seemed to be siginificant wastage, there ALWAYS seemed to be challenging flash and mold issues, and ALWAYS massive amounts of pewter crap to be carved off the bottoms of the bases.  I guess that was the price one paid for reasonably miniatures that appeared on a battlefield instead of the drill field.  This isn't the case anymore.  The days of the 100-man bags are long gone, and 10-15% wastage for 50 men is unacceptable.  Enter Peter Pig.

I know, I know... "my god look at those faces!!!"  Yes sometimes the "Oinker" has some outrageous face sculpts, but I've really only seen the worst examples in his WW2 line.  This always has been a stumbling point with me, I'll admit it, but when the metal meets the meat, I've been impressed.   I've ordered some of his Vietnam line, and have been quite impressed.  The sculpts are crisp, clean, and mostly flash-free.  I haven't seen a "face" issue (where the figure's chin rests on his clavicle), and that prospect really doesn't concern me now.  I am less pleased with the relative lack of variant sculpts (2-3 variants per pose) when compared to the dozen or so sculpts-per-pose with Old Glory, but this is where the painter can make them different with some planning and minimal execution.

With that said I've ordered my first battalion of Confederate Inf'y, and am painting them as fast as I can.  Hopefully within the next week or so I can post some of the results.  I look forward to them pushing 15mm "Billy Yanks" all round the field.