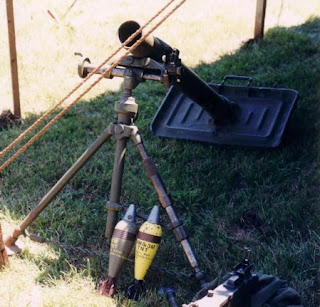 With the wife in New Orleans and the kids with their grandparents... this leaves me "bookoo" time to paint!! My normal painting strategy is to have three or four projects going at once, so while one dries properly I can improve the time on something else. Right now I'm working on MainForce VC rifles, Local VC mortars, Local VC heavy machine guns, and have just put aside VC sappers in favor of doing a VC painting tutorial on a rifle cell. Whew... lots to do!
Right now, let's get a look at the VC mortar team from Flashpoint Miniatures out of New Zealand. What we have here is a three-man team, a gunner, ammo bearer, and security. The VC were frugal with their manpower, and since in all likelihood the section would only fire a limited amount of ammunition, or a quick "fire and run" mission, there is little need for large ammo stocks lying around or many hands to uncase and pass ammunition. I wish to focus on two aspects, first, the mortar weapon itself. I have mixed feelings on the sculpt but all in all they are positive. The tube is sculpted and molded well, the bi-pod has a little to be desired, but its very workable. I mean... who is going to obcess over a 15mm mortar bi-pod? OK we will but that is where our painting and basing magic needs to come into play. What I DO like is its relative size to the crew figures. Its huge, and honestly after doing some research the 81/82mm mortar was not exactly a small thing. Having been exposed to Old Glory 15mm mortars (which seem to be the size of mechanical pencil lead), and Battlefront (which seem to flip-flop from small to large and back every other year) I am pleased with what Flashpoint has offered here.
To make up for sculpting shortcomings (which again are very minor) one needs to be creative with their basing. My plan is to model the mortar dug in, in a relatively shallow firing pit. I glued the assembled mortar directly to the naked stand and marked (the circle) where the edges of the firing pit was going to be.
I routinely add texture to my bases to A) compensate somewhat for the thickness of the figure base, and B) to have some sort of eye-catching detail in concert with the figures, guns, etc. THis is accomplished after "setting the scene" on your base and all your elements are placed and glued down, a healthy amount of PVA glue and railroad ballast is laid onto the stand. I next take a 60/40% water-glue solution and coat the ballast again. This will create a 'seal' over the tiny stones and it will take quite a serious jarring/mishandling to knock the stone off the base. Otherwise, every time the stand is handled in game or in transit you will loose your "ground" so to speak. 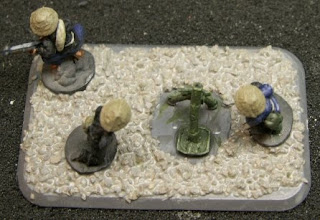 Normally after the 60/40 coat dries I paint with very watered town earth/soil colors and add static grass, bushes, etc to complete the effect. In this instance, I will add a second helping of ballast immediately around the edges of the pit to suggest recently and hastily dug earth. If this were a FwF project I would consider a ring of sandbags... I'm banking that the VC wasted little time on such luxuries.

At any rate this is just a small taste. I'll be sure to post photos on how the final project has evolved.

Stay tuned!!
Posted by TIGERtanker at 2:55 AM No comments:

Yeah, and as luck would have it I draw the VC. Here's a little taste of things to come... 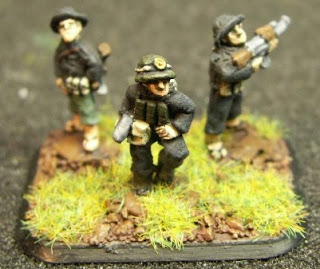 The Platoon Commander (along with the Political Officer looking smug to the left-rear), and a runner. The MainForce VC didn't have radio communications for echelons below Battalion level. Shoe leather (or in this case old tires) was the mode and method.

Lurking through (what will be brush) are three of Hanoi's finest... as part of an B40 equipped cell. Much to my surprise, PAVN forces made up a majority of MainForce VC units as early as 1966-67. 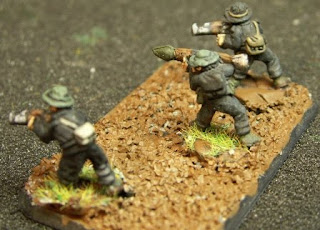 The "black pajamas" uniform was mainly reserved for LocalForce VC and militia units... the "farmers by day and fighters by night". The MainForce VC were the dedicated anti-government force in South Vietnam, just as dedicated and professional (if not as well manned, trained, or equipped) as the NVA.

Lastly we have 4 LocalForce VC assistant heavy machine gunners / ammo bearers. I was saddened to learn that when Saigon fell, and the Communists had their victory, those VC who did sacrifice so much for what they thought they wanted were in the end betrayed by the Hanoi government. In the end the Vietnam War WAS an aggressive war of the North.
Stay tuned for more...

Posted by TIGERtanker at 6:03 PM No comments: