Even though it came as quite a shock to German forces as they invaded the Soviet Union, the Soviets were never completely happy with the KV design.


There were many problems as the Soviet mechanized forces deployed to meet the Germans head on, but lack of effective maintenance, lacks of spares and POL, ammunition shortages, poor training, and mechanical failures (particularly involving the steering clutches) led to high loss rates among the KV fleet in the first few month of the war on the Eastern Front.
By the summer of 1942, the STAVKA were thoroughly disillusioned on the design, meant to give heavy support to light and medium tank companies, the KV couldn't keep up with Soviet tank columns and were often too little, to late.  Part of the problem was that too much was added to the tank in terms of armor protection and technical improvements without any upgrade in the power pack.  This resulted in a slow, sluggish tank with a greater than expected logistics tail.
All KV-1 were pulled out of tank regiments and formed their own separate regiments and brigades to directly support infantry.  Also, the design bureaus delivered the KV-1 S ("speedy") with a smaller cast turret, and armor protection levels along the original specifications.  It was a more vulnerable vehicle, but it made up for it in mobility.
Here I have a company of 15mm KV-1 s heavy tanks, by Battlefront. 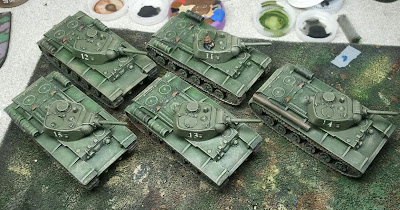 I prefer dry transfers to water-slide decals, and that is what I used for the turret numbers.  No unit in mind, just a generic system.  I used the sponge technique to weather the numbers, giving them a worn and chipped look.
An interesting quirk I found  is that even though the commander is no longer the loader, and is positioned on the left side of the gun behind the gunner, his observation cupola has no hatch!  the only exit is through the loader's station, unbelievable!!
﻿
﻿
﻿
﻿
﻿
Posted by TIGERtanker at 6:35 PM No comments: