Such adoo about NEGRO FLESH!!!

When I first posted the question... the legitimate question of just best to paint the flesh of, I guess technically, an African-American, I was overwhelmed at first of the petty PC bullpocky that came as a response from several individuals on a certain New Zealand figures forum we all know and love. Needless to say I was a bit pissed about the reaction. One would've thought I'd used the "other N-word". Let's just say there were a few too many assumptions about my intentions and a bit too much grandstanding in a forum.

Anyway... what I have for you today is a test subject for an upcoming project. Flashpoint Miniatures USMC rifleman in "15mm". I am painting a Corps fireteam as a mutual favor for my friend Ken, and I get a chance to test color schemes on someone else's figs. Brilliant wouldn't you say? 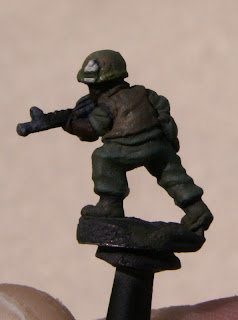 Here we see the back end of a Marine rifleman in flak vest and m16, about to throw a hand grenade at some target to his front. As a uniform base color I used PollyScale "US medium tactical green", and "German panzer olive green" as uniform highlight. This photo is a bit dark and the following pix may do a better job illustrating the two colors. The REAL challenge, I thought, would be the best way to paint the flak vest. Neatly every period photograph of Vietnam marines that stupid vest appears as a dirty brown about 99% of the time. I tried to replicate this by basing the vest in Citadel "graveyard earth", with a highlight on the raised areas of PollyS "olive drab". I think that the effect really works well, as the olive really does much to mute the brown. 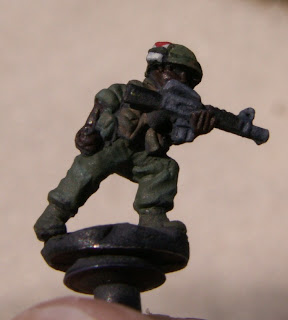 Here is a front view, with the m16 in focus. On the recievers, front sight, and barrel I used PollyS "US sea blue" with a highlight of "British sea grey". The stocks were Citadel "chaos black". The helmet is turning out to be a greater challenge than first realised. I used PollyS "camo green" for the cover, which is quite a bit lighter/brighter than my uniform colors. Followed by blotches of "graveyard earth" and Tamiya "olive green". I next gave the helmet a wash of the "camo green" to help mute the additional colors. This effect is a work in progress. 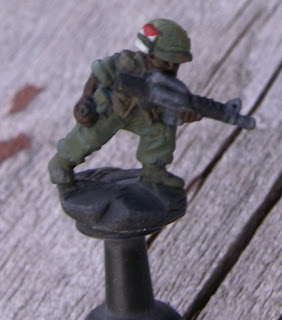 The web-gear is "panzer olive green" and the boots are "olive drab". There is much still to finish, but I wanted to show my progress as of yet. 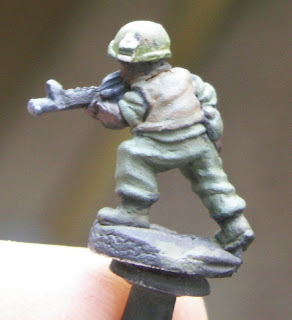 Now for the gorilla in the room, the flesh tone. I used Citadel "scorched earth" as a base, I have yet to choose a highlight. I am a bit anxious to try, I'm almost satified with leaving the flesh unhighlighted, the "scorched earth" doing such a great job as a base. However, I do want the face and hands to "pop", so stay tuned.
I don't forsee making these troops "dirty" with too much weathering, although I may experiement with wet trousers at some point.
Love some feedback.
-out

Posted by TIGERtanker at 2:41 PM 3 comments:

FINALLY!!!! After a very long wait I can begin in all likelihood the "lynchpin" of any Vietnam gaming effort, the Huey platoon. My gaming fiend-partner Ken and I began going down the SE Asian path well over a year & a half ago, but paused indefinately because of the distinct lack of 15mm helecopters on the hobby market. Even the Revell 1/100 models were about all dried up! Honestly, if one can't model an air insertion... there really is no point to the effort. 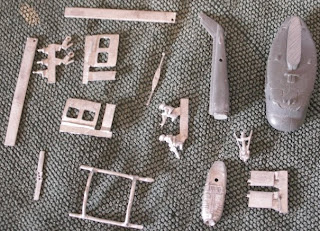 What we have here is graphic manefest of what will go into this huey (and the two others that came with the set) So far so good, and for $20 US per helecopter, I hope they are worth it.

Stay tuned!
Posted by TIGERtanker at 1:38 PM No comments: